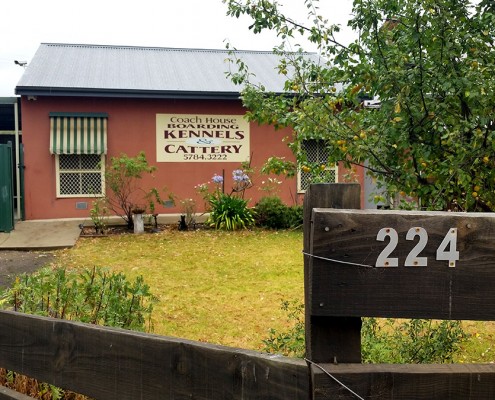 Coach House Boarding Kennels & Cattery derived it’s name as being one of the many original horse drawn coach stops for the Cobb & Co Coach Company on the Melbourne to Sydney Route. The bushranger, Ned Kelly, also frequented here.

The Coach House originally built in 1880 remains in it’s entirety, however all other development (the pets accommodation) on the property are new. The proprietor and resident manager Elizabeth (Liz) is an avid animal lover and also an internationally qualified Veterinarian Nurse. Liz has worked as a vet nurse in countries like Japan, Singapore, Canada, America and Australia. With such an enormous love for animals and the desire to be self employed it was a natural progression for Liz to own her own pet business. It was decided to build from the ground up, and once a location was found, (August 2004) well the rest is history, hence Coach House Boarding Kennels and Cattery was born, we opened for business in December 2004.

All our staff have a certificate in Animal studies or working towards a the certificate.  On going education is provided to all staff members to assure your pets are in knowledgeable kind hands. 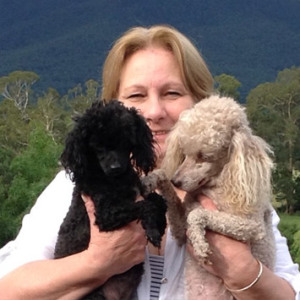 Elizabeth Vaughan ( Liz) owner and operator since the beginning.

I have been surrounded by animals since I can remember and cannot even think about being without them.

I have been a vet nurse in several countries as well as do contract work for local government in the animal management area making me aware of all the legislative requirements for the business keeping your pets safe and happy in our kennel and cattery.

Besides that I love being with each and every animal that comes through the door to know them as individuals. 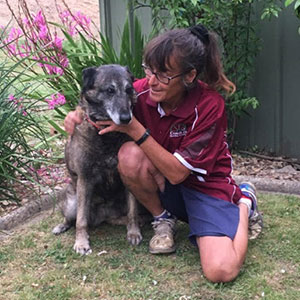 We welcome Kylie back to coach house boarding kennels. Kylie was with us from 2005 to 2008 and left to take care of her son and start her own business.

Kylie is pictured with Kosha. Kosha was one of our residence who was adopted by Kylie over 13 years ago.

Kylie’s has a keen attitude, she makes each pet feel safe and loved during their stay, making her a valued staff member. 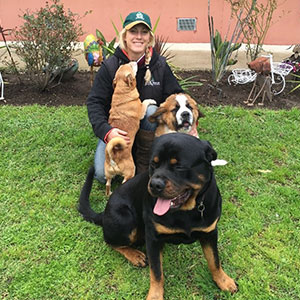 Lauren has been with Coach House Boarding Kennels from the beginning .Between contract work on stations in Western Australia and working at the kennels she has acquired many skills working with animals. Lauren holds a diploma in Agriculture. Lauren now has settled in Victoria and also has her own business “Twin Dams Horsemanship” specializing in unhandled horse, breaking and re-education. 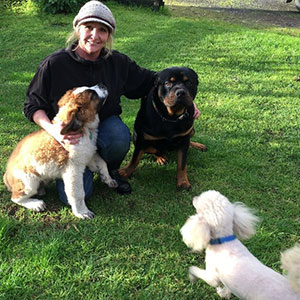 Sandra has been with Coach House Kennels for several years now and is our full time main handler. Sandra has human nursing background which she says “caring for the animals that are aged or with special medical requirements is very similar to a day at the hospital”. When Sandra was living in Queensland between her nursing she volunteered at animal rescue group. Sandra has a natural way with the dogs and cats and they all seem to love her.

What others say about us 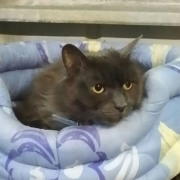 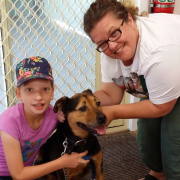 Poppy our mastiff X is very shy. She comes to Coach House Boarding Kennels every year during the holiday season. She loves children. Liz’s granddaughter has helped Poppy have an enjoyable stay.

Liz and her staff have been taking good care of Shadow and Max our 2 dogs since 2008. One year the kennels were closed while Liz went to Europe.  Max and Shadow went to another kennel. We were so glad when Liz came back.  Our beloved Max recently passed away.  Shadow still loves coming to the kennels and enjoys the other dogs at playtime.

Wren and Jackie our two fox terriers come to CHBK.  Wren is now 13 years old and requires medication. We know Wren will be well taken care of and it is good to know that the staff is well trained in giving medication.